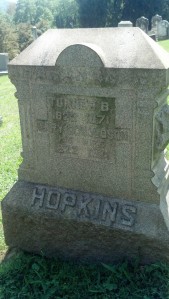 Turner Bell Hopkins was another interesting character of early Blair Co. Life who lived among the early and few pioneers of Western 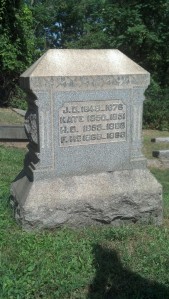 This was a man that was a saddler. Wiki notes the trade as:

Saddler is both a skilled trade, it refers to the occupation of making saddles.

Turner Bell was drafted for a brief few weeks during the tail end of the Civil War.

Turner Bell is an important figure in my ancestry buried in Hollidaysburg, PA. (Presbyterian Cemetery) .He was my Great, Great, Great -Grandfather.

It is thought that Turner’s middle name Bell came from the friendship of the Bell family [ from where Bellwood, PA (Bell’s Mills) ] originated from as was common in the pioneer days to take a close family surname for a childs middle name. Turner Bell Hopkins’ GG  Grandparents are buried next to the John SR Bell in Logan Valley Cemetery in Bellwood, PA. (Formerly Mary Ann Forge Cemetery)