Tytoona Cave is located approximately 1-mile (1.6 km) from Arch Springs, Pennsylvania in Sinking Valley, near Tyrone and Altoona, in the United States. This preserve is the ninth nature preserve owned by the NSS 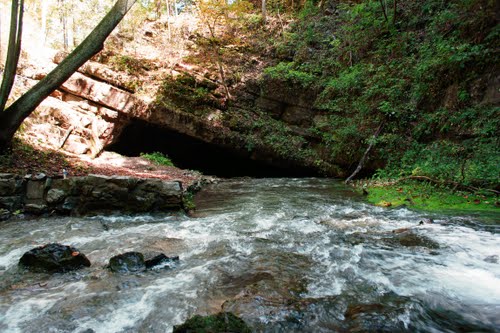 The Cave’s entrance is located in an approximately 100-foot (30 m) deep sinkhole. A stream emerges from the base of a sheer wall of the sinkhole opposite the cave entrance. This stream flows about one hundred feet or so before entering the Tytoona cave entrance. An above-ground stream enters the sinkhole and joins the stream emerging from the cliff. The flow of the above-ground drainage is very dependent on the amount of recent rain; the flow of the stream emerging from the base of cliff also varies greatly. The entrance to the cave slopes from ground level on the left diagonally to a high point of about 12 feet on the right. In the cave, the stream bottom is fairly flat and rather wide (~25 feet). The stream bottom is covered with gravel. The cave has a clay-covered path over a rock shelf on the left-hand side, with several very short dead-end passages on the left.

The first few hundred feet of the cave can be explored by almost anyone; however, at about 400 feet in, a massive logjam almost completely blocks the passage. Up to this point, there are not many formations (such as flowstone, stalagmites/stalactites, soda straws, etc.) visible. Those familiar with the cave can bypass the logjam by walking in the stream, which passes through a gap beneath most of the logs. Past the logjam lies another 500-foot passage. A number of formations can be seen in this section, although some have been vandalized. Also, several decayed wooden beams can be seen, remnants of the early attempts at commercialization. The cave is walkable for about 900 feet total before a sump is encountered.[2]

Past this sump lie several more rooms connected by sumps, the first of which contains magnificent formations and is apparently airtight – no matter how high the stream is, the rooms will never fill with water. However, the current owners of the cave have banned cave diving since the death of diver Roberta Swicegood in the cave in June 1988; even if diving was permitted, even a skilled cave diver likely could not pass the first sump, since debris has accumulated and visibility is close to zero. 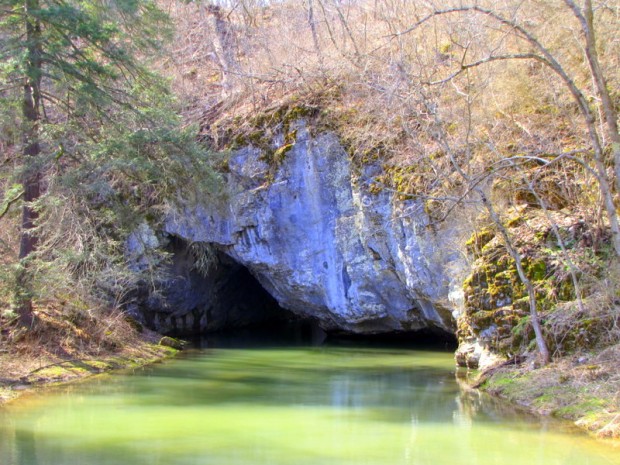 Eventually, the stream connects with the nearby Arch Spring Cave, but underwater blockages and cave-ins prevent a complete trip through. The total length of the cave system, from the entrance to the exit at Arch Spring, is about 4200 feet

You should expect your feet to get wet.The water is less than a foot deep most of the time (unless you visit after a heavy rain). I wore aqua socks when I visited it last week. Unfortunately our pictures didn’t remain on the camera that we used so I didn’t have any to add to this post.

Bring a flashlight and watch out for the salamanders. We found a really cool yellow one inside the cave.

The temp inside is only 56 F. I could see my breath on a 90 degree day. A light jacket is a good idea. I was fine in shorts and a T but if you decide to venture past the first 400 yards, you will want something to keep you warm that works when wet.

There is a book inside on the left within the first few hundred feet in one of the dead end passages. It is inside of a PVC pipe for visitors to sign. We forgot to when there last but will do so on our next visit.

Across from the cave (to the left if you are facing out while standing in the mouth is another “hole” It is a small cave that a human couldn’t fit in but the interesting thing about is that I couldn’t see the bottom of it with my flashlight.

This is what it looked like from inside the mouth of Tytoona Cave when we went: