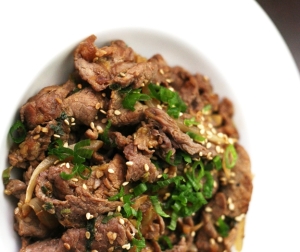 Tip to cut Beef: half freeze it so that the piece of beef is almost solid through, then use a sharp kitchen knife to slice pieces, against the grain. If the beef thaws and becomes soft and hard to slice during this process, just pop it back in the freezer to firm up for an hour or two before continuing. 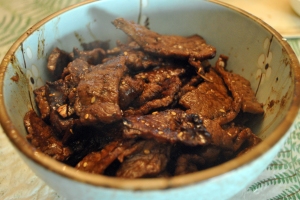 1. Use your hands to squeeze the juice from the apple over the sliced beef and set aside. Using an extremely fine grater, turn the onion (and optional pear) into pulp (alternatively, you can just blend till liquid but this makes the marinade a bit watery), then mix together with the soy sauce and crushed garlic, then taste for sweetness. If it’s not quite sweet enough for your tastes, add all the sugar, but if it’s close, just add 1-2 tbsp of sugar, mix and taste again.
2. Add the sliced meat to the bowl, then pour the marinade over the top, then add the sesame seed oil,3 sliced green onions and cracked pepper and massage all the marinade into the meat for about 1-2 minutes, making sure none of the slices of beef are stuck together and that the marinade has been distributed evenly throughout.
3. Pour into an airtight container and store in the fridge for at least a few hours, ideally overnight, and cook over a griddle or in an un-oiled non-stick frying pan – the reason for that is that the pan juices are extremely tasty, and can be very nice poured over your bowl of rice!
Though the common translation of this is ‘Korean bbq beef’, a direct translation of the name is actually ‘fire meat’. It really should not be cooked over a traditional Western bbq as the meat is sliced so thin that you’ll lose a lot of it through the grill! Instead, if your bbq has a flat plate then use that or a flat griddle pan, or just use your frying pan in a pinch!

Serving Information:
While this is quite tasty, it’s not exactly a dish that you eat on it’s own – it should be served (at the very least) with a bowl of rice and an assortment of kimchi and other banchan.
Bulgogi is extremely tasty to serve cooked together with other ingredients – enoki mushrooms (about 1-2 bunches with the roots trimmed, washed and patted dry), (mung) bean shoots, grated carrot or baby bok choy, briefly blanched and drained.
Another great addition is some cellophane rice noodles or bean noodles.
The final way that bulgogi can be enjoyed is in the Korean ‘ssam’ style – as a lettuce leaf wrap. Take a few crisp lettuce leaves, washed and spun dry, then place a spoonful of rice in the middle, a piece of bulgogi, ‘ssam jang‘ (a fermented soybean/chilli paste specially made for this style of eating) and a few banchan, then wrap up and enjoy! If you can be bothered, grilled garlic cloves taste GREAT in this combination, so if you’ve got a grill pan, peel a few cloves, pop them on and leave to cook through before adding them to the spread!
I also really like Korean (or any hot pepper powder made into pepper paste and even better, Sriracha! (aka Rooster Sauce)

Finally, I usually chop a few green onions and garnish the beef with them fresh, not cooked.

My Cousin Sun Yung made this for me many moons ago and I have loved it ever since. I can’t get enough of it! Thank you Sun Young.