I bet you thought that I was going to spring some kind of healthy grilled cheese recipe on you.

Grilled cheese is designed to be inherently unhealthy. That’s what makes it so damn good…

I am going to add a few tweaks to it that will make a world class sandwich that everyone will love you for making.

Colby- Jack Cheese. No other cheese works and tastes so good on a GC Sandwich. I hate the cute “sammi” that Rachel Ray calls her sandwiches so you won’t see it here…

Back to the sandwich.

BACON GREASE! – Instead of butter- it makes it a tad crunchier and doesn’t get soggy.

Heat up skillet (preferably a cast iron but any wil do) to med to med-High heat. While skillet is heating up, add enough bacon grease to cover the bottom of the skillet (enough to lay the bread on and still have grease visible around it.

lay a lightly toasted slice of bread in the skillet, on the grease and top woith your slice of Colby Jack Cheese.

Put the other slice of bread on top. Heat until golden brown.

Remove sandwich and add more bacon grease as you did for the first side of the sandwich then place the uncooked side down on top of the grease and let set until it is golden brown.

NOTE: For a twist you can add creme cheese ( if you really want some rich sickness) but be sure not to cover the sandwich from crust to crust (leave an inch around the perimeter. You will see why if you try it. I prefer my GC sans Creme cheese but some people really dig it.

I really like my GC accompanied by a nice cool, small bowl of Gazspacho…

To me a bloody Mary is just like Gazpacho – Try this Shooter Drink (Pseudo Gazpacho Shooter) with your GC sandwich: 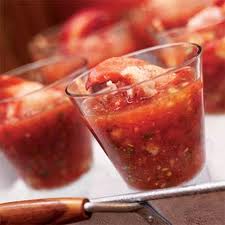