Is the testicle-eating fish spreading across the country?

After the news last week that a New Jersey pensioner reeled in one of the exotic fish, notorious for reportedly killing men by ripping off their genitals, comes the news that one was caught in August in a quiet family lake in Washington state.

If you want to hold onto your nuts, you may want to avoid swimming in waters infested by the Pacu, a relative of the piranha that’s known to have a taste for human nuts. The Pacu is native to South America, but a specimen was recently found by fishermen in the strait of Oresund between Denmark and Sweden, prompting experts in Denmark to warn men to keep their swim clothes on when taking a dip in the sound.

The Pacu is generally a vegetarian. It eats nuts (from plants) and fruit and also small fish. It is not normally a threat to people, but after being introduced to Papua New Guinea two decades ago to increase fish stocks there, it became notorious for its taste for human testicles. There, it was nicknamed the “ball cutter,” because as Henrik Carl, a fish expert at the Natural History Museum of Denmark explained to The Local, “They bite because they’re hungry, and testicles sit nicely in their mouth.”
“And its mouth is not so big, so of course it normally eats nuts, fruit, and small fish, but human testicles are just a natural target. It’s not normal to get your testicles bitten off, of course, but it can happen, especially now in Sweden,” he added.

It is believed the fish was released into Scandinavian waters by a fish collector. Pacus have also been found in several U.S. states, including Texas. It is almost identical to the piranha, except that it has humanlike teeth and lacks the latter’s severe underbite.

Although part of the same family, the pacu has thicker, sturdier teeth that resemble human ones, unlike the piranha, which is renowned for its deadly serrated incisors.

Pacu’s are legal to own in the United States and can grow up to 4 feet long, which is why the owner may have worried and released it into Lake Ki.

In 2011, one intrepid British angler traveled to Papua New Guinea to catch pacu, known locally as ‘The Ball Cutter’.

Jeremy Wade, 53, hunted for the legendary pacu after hearing reports of the fish killing local fishermen by castration. 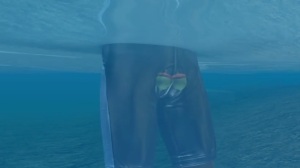 The ‘Ball Cutter’ it is said to use its man-like molars, which tear off the testicles of unwitting hunters, leaving them to bleed to death.

Another Pacu (yeah, the testicle-eating fish) has been found, this time in a lake near Seattle, Wash. John Denton caught the beastly fish in Lake Ki in Marysville, Wash., and the Washington Department of Fish and Wildlife says it’s 17 inches long.

The Washington Department of Fish and Wildlife’s Jeff Holmes explained to the Huffington Post that the fish was probably dumped into the lake because it was entirely too large for its owner’s tank.

← Hopkinberg
Er Wang Dong: Have you seen it? →